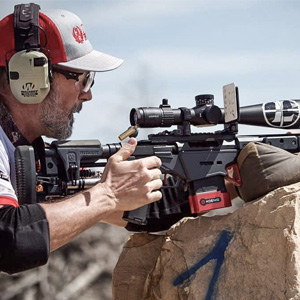 Koenig took first place in the Production Division at the 2021 PRS Bolt Gun Series Finale match held at the world class NRA Whittington Center in Raton, NM finishing with a final score of 147.00. Doug claimed his win competing with the stock Custom Shop Ruger Precision® Rifle chambered in 6mm Creedmoor. With the Finale win, Doug also claimed the PRS Bolt Gun Production Division Championship title, earning a total of 500.00 series points and placing him in the top spot for the year.

"Winning the Production Division at the PRS Finale and the Production Division Championship couldn't have been accomplished without super consistent equipment," commented Koenig. "Through more than 10 matches and thousands of rounds down range, my Custom Shop Ruger Precision Rifle performed flawlessly all year long. That is a statement of how rugged and reliable they are!"

Team members Dave Olhasso and James McGinty also took on the New Jersey State Rimfire Challenge held in Old Bridge, NJ. Olhasso secured a first place finish in the Limited Division with a final combined pistol and rifle time of 125.99. McGinty took the second place spot in the Open Division with his combined final time of 115.12. Both competed with the Ruger Custom Shop® 10/22® Competition Rifle and the Mark IV™ 22/45™ Tactical.